AASHTO’s Manual for Assessing Safety Hardware (MASH) was released in the Spring of 2016 and is considered an updated replacement of the NCHRP Report 350.  At a high level, AASHTO defines MASH as presenting, “uniform guidelines for crash testing permanent and temporary highway safety features and recommends evaluation criteria to assess test results.”  Not only does it further expand on the testing requirements listed in the NCHRP Report 350, but it also offers guidelines for when MASH tested and approved attenuators must be used on your TMA trucks.

What are the major changes from nchrp 350?

In comparison to NCHRP Report 350, there are several major changes that make MASH testing stricter and more difficult for attenuators to pass and be deemed safe for highway use. To explain the differences in the two reports, we must first examine what tests where required in the NCHRP Report 350. 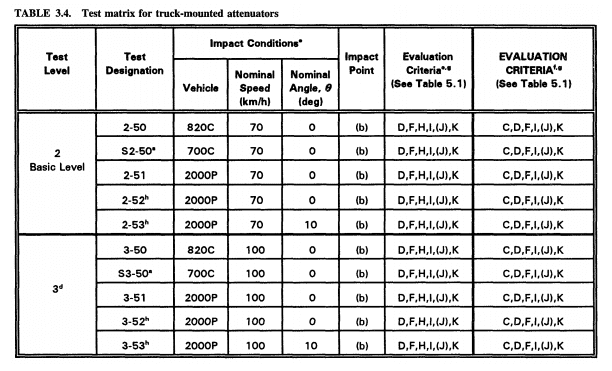 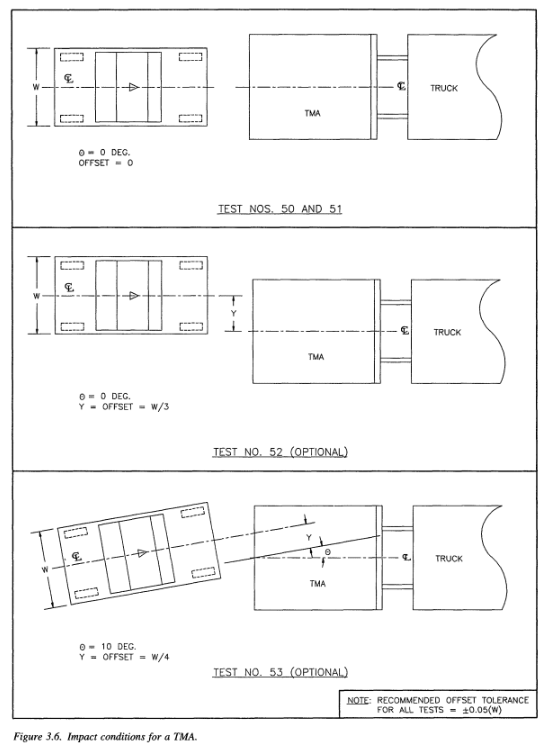 The first mandatory test done in Test Level 2, Test 50, was set to, “to evaluate risks to occupants of a small car impacting the TMA.”  In this test, an 820C vehicle weighing in at 1,800 pounds directly struck the TMA traveling at 70 kilometers per hour (km/h), or approximately 43.5 miles per hour (mph).  The next test performed, Test 51, represented the exact same situation with the only difference being the 820C vehicle being replace with a pickup truck, referred to as a 2000P, weighing in at 4,400 pounds.

While these two tests were required, the NCHRP Report 350, also listed two optional tests for a TMA to undertake.  The report even says that, “Tests 52 and 53 are new tests and there is no assurance that current TMA designs can meet requirements of these tests. Moreover, there is no assurance that new TMA designs can be made to meet these test requirements without significant increases in cost or without detrimental effects on truck handling, TMA durability, or other operational considerations.”

With all the tests listed above being categorized as Test Level 2 tests, otherwise known as the basic level, the report also ran the same tests under Test Level 3, with the only difference being the impacting vehicle’s speed being increased from 70 km/h to 100 km/h, or approximately 62 mph.

All the tests were judged on the same criteria, including:

At the time these testing guidelines were created in 1993, these tests were up to standard in determining the effectiveness of truck mounted attenuators.  As you will see though, these tests have become significantly outdated over time.

Now that we know what exactly the NCHRP 350 tests for truck mounted attenuators entailed, we can examine the changes that the MASH testing made.

The first major change made was to the weight of the impacting vehicles, both the 820C (small car) and the 2000P (pickup truck). The weight of the 820C vehicle has been increased to a 1100C vehicle, now weighing 2,420 pounds.  Additionally, the 2000P vehicle has been increased to a 2270P vehicle, weighing in at 5,000 pounds. These changes were made to reflect the increased weight of new passenger vehicles on the market today compared to when the tests were originally created.  With the evaluation criteria remaining the same, a heavier impact vehicle makes passing the tests a much more difficult task.

The next major change that was made to the NCHRP Report 350 in the MASH tests was now requiring Tests 52 and 53 to be completed.  In a real-life situation, very rarely does a vehicle crash into the attenuator on a TMA truck perfectly centered and straight.  More often, the driver of the errant vehicle will try to veer out of the way in order to avoid the crash, making the contact with the attenuator off-center and at an angle.  By making Tests 52 and 53 mandatory, the attenuator is better tested to mimic real life scenarios it will face.

Ultimately, the testing changes made in the MASH tests were done with the purpose of ensuring that truck mounted attenuators currently on the market can stand up to real-life crash scenarios that they will frequently face in today’s work zones.  With a worker’s safety being the number one priority, MASH approval for a TMA is a clear sign that the unit is safe to be in your work zone.

When is the sunset date?

With all the new guidelines in place, one obvious question that arises is when you need to officially begin using MASH tested and approved attenuators on your trucks.

The simplistic answer to this question can be found directly in AASHTO’s document published in May 2018 entitled, “Clarifications on Implementing the AASHTO Manual for Assessing Safety Hardware.” In this document, AASHTO states that,” The AASHTO/FHWA Joint Implementation Agreement states that temporary work zone devices manufactured after December 31, 2019, must have been successfully tested to the 2016 edition of MASH.”

While this may seem like a clear cut date, diving deeper into this reveals the answer to when you must begin using MASH tested and approved attenuators is a more complex answer.  While AASHTO’s guidelines state any attenuator manufactured after December 31st, 2019 must meet the new testing requirements, each individual state can set their own deadline in terms of when they are choosing to enforce this.

How can this be?
Similar to many other regulations surrounding TMA trucks, states can create their own regulations.  In practice, what this means is that while AASHTO’s guidelines have a sunset date of December 31st, 2019, each individual state may choose to have a sunset date either before or after this deadline.

If you have any questions about the MASH standard, please contact our sales team 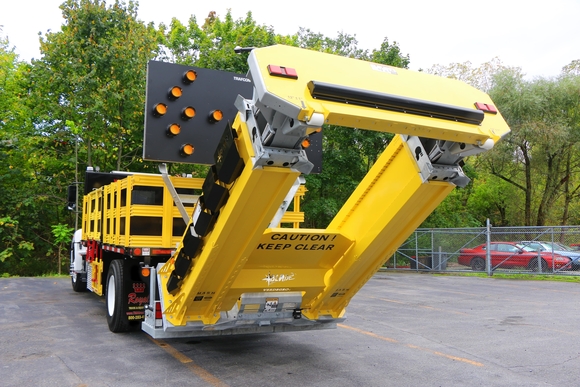 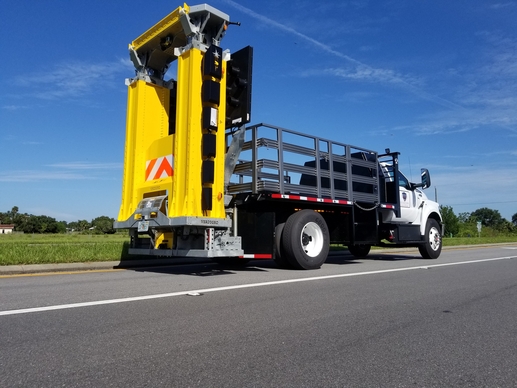 We collect information to gain insight into our website visitors and to coordinate our marketing campaigns accordingly. We place tracking cookies for this, of course only after your permission.